Cancer due to welding fumes? We know that for a fact!

Every day, several million people around the world come into contact with welding fumes. It is undisputed today that the hazardous substances in welding fumes are hazardous to health – and some even carcinogenic. But it was not until 2017 that the International Agency for Research on Cancer (IARC) officially confirmed this finding. Since then, experts have continued to work on research into the health consequences of welding fumes. A look at past studies and the current state of research.

According to IARC estimates, around 11 million people worldwide were considered professional welders in 2017. A further 110 million employees were regularly exposed to the emissions resulting from welding. These include fumes, gases, ultraviolet radiation and electromagnetic fields. The fumes are mainly generated during electric welding with arc temperatures of more than 15,000 °C. The consequence: Components, especially those of the filler material, evaporate and condense into tiny particles that, without special protective measures, can be inhaled by employees.

An expert group convened by the IARC evaluated all scientific studies published in March 2017 and this time was able to prove it: Welding fumes are carcinogenic to humans, regardless of the process used or the type of metal welded. Only the extent is different for each method. Five years earlier, the agency classified intensive UV radiation resulting from electric arc welding as carcinogenic. The researchers also confirmed this classification in 2017, thus proving that the radiation causes eye tumours.

A look into the past shows that the carcinogenic effect of these hazardous substances was completely alien to welders. In the 1970s, even the general health hazard posed by welding fumes was still unknown – in part, it was even considered to be healthy. In 1989, the IARC, an agency of the World Health Organisation (WHO), classified welding fumes as “potentially carcinogenic”. At the time, the data from the investigations was not sufficient to provide a reliable basis for classifying welding fumes as actually carcinogenic.

In the years following this classification, other studies followed that provided further important findings on carcinogenic hazardous substances. One of the most important studies is the work of the SYNERGY project, which was published in the IPA Journal in 2013. The researchers investigated the lung cancer risk for welders and people in occupations with occasional welding activities. The research was coordinated by the IARC among others. The researchers investigated a total of 33,871 men, including 15,483 cases of lung cancer and 18,388 control subjects. Compared to previous studies, their smoking behaviour, the duration of activity and the welding procedures were also taken into account.

The result: The researchers found a greater risk of lung cancer for full-time welders as well as for the people who had welded occasionally. The risk increased in both groups with increasing duration of employment, but was lower for occasional welders. The researchers also observed an elevated risk of cancer in non-smokers. In addition, they included sectors of industry in the evaluation.

For example, welders in shipbuilding, construction, machinery manufacturing and the repair of transport equipment have a higher risk of lung cancer than welders in vehicle manufacturing. Automation and welding robots are increasingly being used in the latter branch of industry. In this study, however, they were unable to identify any reference to individual carcinogenic hazardous substances in welding fumes. Factors such as welding process, smoke composition and level of exposure could also not be taken into account. 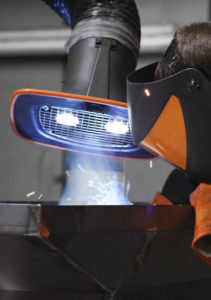 In order to understand the full extent of the health hazards of welding fumes, it is important to know that the hazardous substances produced during welding have different effects on humans. The substances are composed of a number of components: Basic and supplementary materials, inert gases, coatings, contamination and ambient air. Experts differentiate between lung-damaging, toxic and carcinogenic hazardous substances.

Not only can carcinogenic substances in welding fumes cause malignant tumours in the body, they can often also have a toxic effect. However, other factors such as hereditary factors and environmental pollution have an influence on the risk of cancer.

Carcinogenic substances include chromium VI compounds and nickel oxide, for example. In 2018, the IPA Journal published the results of its collaboration with the Institute for Occupational Safety and Health of the German Social Accident Insurance (DGUV). Together, they evaluated measured data for emissions at the workplace. The focus here was on welding fumes containing chromium VI compounds, nickel oxide and manganese.

The researchers found that: The welding process and the filler materials used have a decisive influence on the exposure. Particularly in high-emission processes, such as metal active gas welding (MAG) and metal inert gas welding (MIG) of low-alloy steel, welders were exposed to higher exposures compared to carcinogenic hazardous substances in welding fumes and manganese compared to tungsten inert gas welding (TIG).

Carcinogenic effect of welding fumes not yet fully investigated

Since the 1970s, several scientific studies have investigated the carcinogenic effect of certain hazardous substances in welding fumes and, finally, clearly demonstrated it in 2017. This does not mean, however, that we know all about it today. Further research is needed to find out more about the complex dose/response relationships, for example. The aim is to be able to assess the health hazards for welders more precisely in future and to interpret occupational safety even more effectively. In any case, effective extraction is required to protect the employees from the welding fumes – and this requires powerful and reliable extraction systems.

Music coming out of the welding fume extraction hood: KEMPERbeats – did I hear that correctly, Mr. Kemper?

Thanks to a comprehensive clean air concept: How Nobels B.V. managed to meet strict limits