Thanks to a comprehensive clean air concept: How Nobels B.V. managed to meet strict limits

How are companies to comply with strict limits in the future? The clean air concept of the Dutch company Nobels B.V. shows how this can be done. The mix of different occupational safety measures brings added value in many ways.

“In the past, an unpleasant layer of welding fumes used to spread over the entire production area,” says Ramon Kocken, Production Manager at Nobels B.V., describing the undesirable and health-endangering distribution of hazardous substances. Although the machine manufacturer has always attached great importance to the subject of occupational safety and protected the welders directly involved by means of individual measures, it was not possible to prevent the spread of the smoke. However, there was no comprehensive clean air concept. Until Nobels thought beyond the individual workplace consideration:

Nobels’ aim was to ensure a high level of health protection for all production employees at its headquarters in Noordwijkerhout in South Holland. 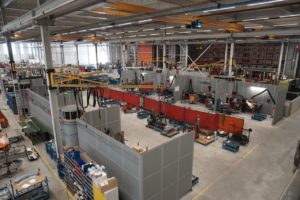 This was driven in particular by the increase in employee productivity throughout production. Nobels, inventor of the first devices for

the machine harvesting and planting of flower bulbs and today represented with its machine technology in more than 60 countries worldwide, wanted to continue its growth – and this with healthy and satisfied employees. Not only that the World Health Organization has classified welding fumes as carcinogenic since 2018: The Netherlands also has one of the strictest workplace limits in the world. A welder may only be exposed to welding fumes of up to 1 mg/m³ during an eight-hour working day.

Together with the extraction specialist KEMPER, Nobels B.V. developed a tailor-made air pollution control concept for the entire hall air in production with the following measures: In the beginning there was the organisational consolidation of the welding workstations into one spatial unit. Previously, welders processed components at various points in production. Nobels centralised the eight welding workplaces in the middle of the hall and created a welding workshop with several separate workplaces in the open production architecture. This meant a coherent hall air unit for all the different processes. Effective extraction technology was of great importance in order to also protect surrounding work areas from the hazardous substances that are harmful to health.

Air quality concept with a mix of measures for extraction technology 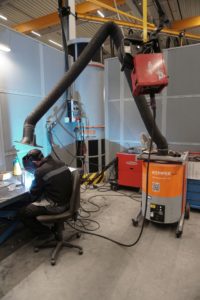 Against this background, KEMPER developed a mix of measures tailored to Nobels’ needs, consisting of point extraction and room ventilation systems. A mobile extraction unit with the largest filter surface available on the market in this unit class of 42 m2 is used at each of the eight welding stations. This has the following advantages for Nobels employees:

In order to improve the indoor air quality beyond point extraction, Nobels also uses four room ventilation systems with storage filters, which are installed via plug & play. The stand-alone room ventilation systems each clean the air in a 360-degree radius according to the recommended stratified ventilation principle. The system collects the air containing pollutants in the upper area of the filter tower at a height of around three metres and releases the cleaned air back into the hall air via outlets close to the floor. In this way, the system makes use of the rising thermal of the welding smoke. Despite the high extraction capacity of up to 9,000 cubic metres of air per hour, hardly any air turbulence occurs during extraction. This prevents hazardous substances from spreading to surrounding areas.

So-called storage filters are used in both the spot extraction systems and the room ventilation systems. In contrast to cleanable filter media, these must be replaced after saturation. The selection of the suitable filter medium and the decision for the storage medium was made in the concept phase. The decisive factor here was the processing of even oily components. This is because the oil evaporating during welding condenses on the filter surface and forms a moist lubricating film with the welding smoke particles, which also penetrates the filter medium and cannot be cleaned as usual. Therefore, the choice fell on a storage medium with a large filter surface, because its service life is disproportionately extended in relation to the filter surface used. The decision for these media also took into account the special challenges of Nobels B.V.

Nobels highly satisfied with implementation of the clean air concept

Meanwhile, the Dutch machine manufacturer is satisfied with the implementation of the new occupational safety concept. “The problem of the welding fumes layer in our production hall has been solved,” says Kocken. “Our employees are now very satisfied with the good air quality. Nobels benefits from the new clean air concept not only in terms of employee satisfaction. Productivity also increases. Because, says Kocken: “Only healthy employees are productive employees.”

Cancer due to welding fumes? We know that for a fact!