Welding with additives containing manganese promotes the occurrence of symptoms that are similar to those of Parkinson’s disease. The higher the manganese content in the welding fumes, the more marked are the symptoms that arise. These are the findings of a recent study.

The suspicion has already been around for a long time: Welding with materials containing manganese may cause symptoms similar to those of Parkinson’s disease. A recent study from the USA corroborates the risk from manganese in welding fumes. A total of some 890 welders participated in the study by a research team from the medical faculty of Washington University in St. Louis, with the research director Brad A. Racette . Just 400 of these were monitored over a period of ten years. Of these subjects, around one third developed Parkinson’s symptoms.

Manganese in welding fumes attacks certain regions of the brain 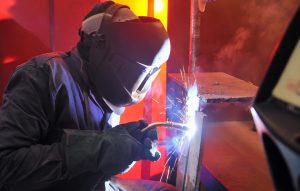 Manganese poisoning is also described as manganism. The symptoms are very similar to those of Parkinson’s disease, owing to which the term manganese-induced Parkinsonism is also used. The precise connection is in the damaged regions of the brain: Manganese accumulates mainly in the globus pallidus in which it damages the dopaminergic system. Again, in Parkinson’s disease, damage to the dopamine-forming neurones is a significant feature. The signs of the disease found in welders embraced mainly slower movements of the upper limbs, stiffer limbs, speech problems and a fixed stare.

The higher the manganese content in the welding fumes, the worse the symptoms

The key finding of the study: The severity of the symptoms occurring is connected directly to the quantity of manganese. The problem for welders is mainly the increase of the manganese content in welding fumes caused by manganese in alloying or in the coating and filling of additives. This is when toxic manganese compounds, such as manganese oxide, are released. The more manganese there is as a component of an alloy, the worse are the Parkinson’s symptoms exhibited.

In an earlier study in 2001, Racette had already established that there was a risk ten times greater that welders would suffer from manganese-induced Parkinsonism. He also described how welding or exposure to manganese favored an earlier onset of Parkinson’s disease. When occurring in high concentrations, manganese oxide can also have an irritant effect on the respiratory tract and lead to lung inflammations.

The fact that exceeding the manganese limits and simultaneous compliance with the overall welding fumes is conceivable poses a problem. Fumes from acid-coated rod electrodes, for example, contain up to ten percent manganese oxide. Therefore, in this case, manganese oxide can also be a main component in welding fumes. Consequently, the US researchers from St. Louis are recommending an extremely stringent check of work places as a matter of urgency. For welding with steel containing manganese, this means: operations should emphasize an effective extraction system.

40 years of KEMPER - the interview: "In former times, welding fumes were regarded as healthy to some extent”