A new production site, the capacities significantly increased: In the course of its expansion in Micheldorf, RIKA Blechkomponenten GmbH not only renewed its machinery, but from the outset also consistently considered health protection for its employees. Together with KEMPER, the sheet metal supplier developed a comprehensive air pollution control concept – and is thus also positioning itself for the future in the context of the shortage of skilled workers.

The positive development of business left no other conclusion for RIKA Blechkomponenten GmbH: in order to be able to continue to grow continuously, it had to increase its capacities significantly. Having emerged as an independent company from RIKA Metallwaren in 2003, the 185-man operation that is now in operation had developed into one of the largest sheet metal suppliers in Austria. Against this backdrop, the company initiated further expansion at its Micheldorf location in Upper Austria and opened up a new production area in the neighbourhood. The new building was started in 2018. Not only the machinery for sheet metal cutting, bending techniques and welding work was to be realised at the highest level. The manufacturer also placed a special focus during the planning phase on the necessary occupational safety for its employees. 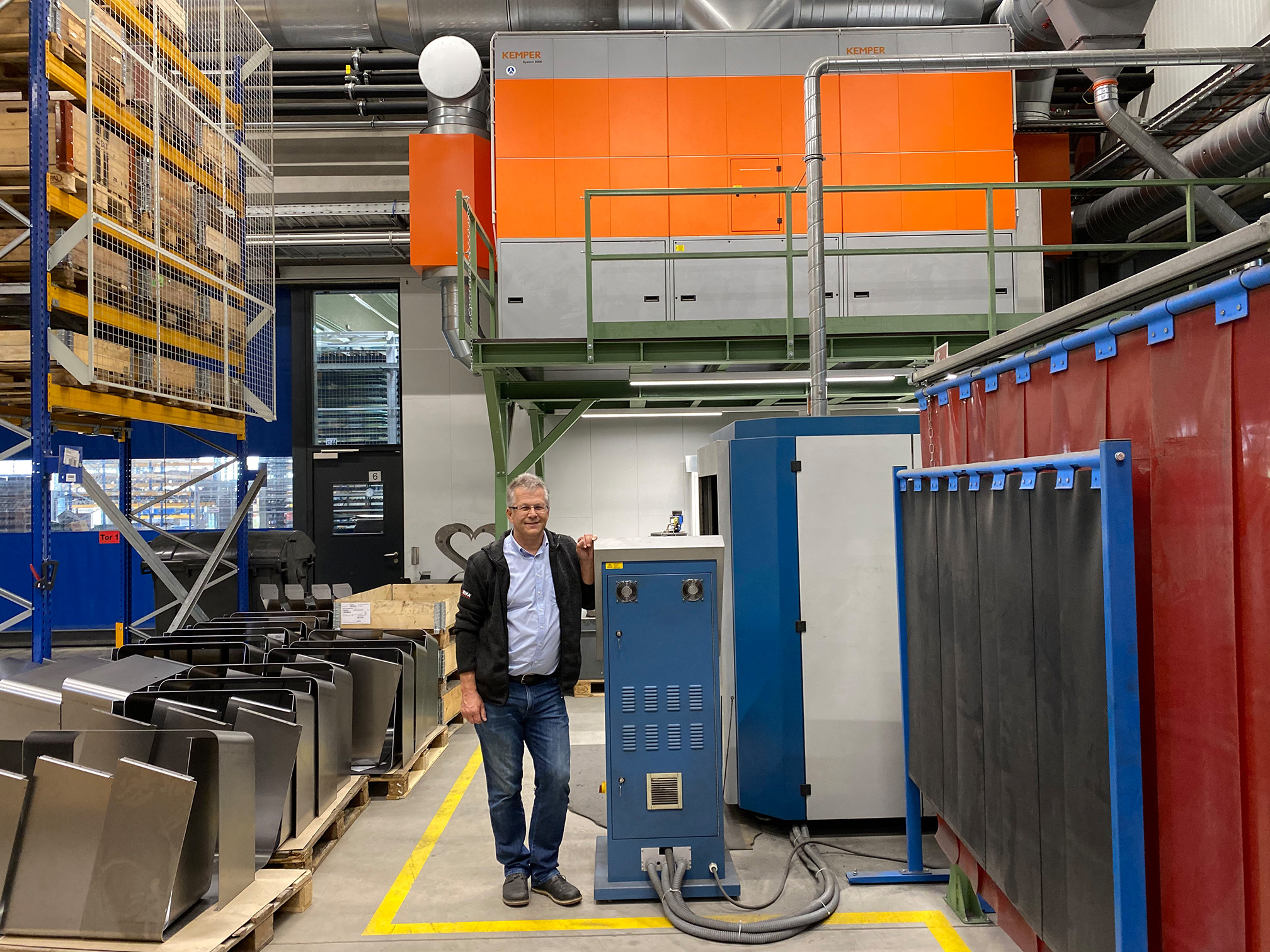 “We have been using extraction equipment in our production for a long time. What we have been lacking, however, has been an overall view of the hall air quality,” explains Reinhard Trippacher, managing director of RIKA Sheet Metal Components. As a result, the company used extraction systems for various work areas from different manufacturers. As these were not coordinated with each other, the occupational health and safety measures turned out to be unsatisfactory – also due to the low level of user-friendliness of the systems. The employees gradually lost confidence in the occupational safety measures, and so it happened that a dangerous mist was repeatedly formed by the hazardous substances in the hall air. Aware of the major health hazards – the World Health Organisation classifies welding fumes as carcinogenic – Trippacher wanted to improve the situation for his employees again: “Against this serious background, we set out to find a permanent partner for occupational safety.

RIKA Blechkomponenten sounded out the market for effective extraction technology. The sheet metal fabricator chose KEMPER because of the best overall offer. The extraction technology specialist put together a tailor-made air pollution control concept for the new local conditions. Only two months passed between the initial discussion, an initial rough concept and the award of the contract by RIKA. In the meantime, both companies refined the concept until it was ready for commissioning. This meant that the extraction technology was also precisely in place when production started in May 2019. Since then the extraction systems have been running almost continuously without error messages during every shift. “Thanks to KEMPER technology, the air in the hall is extremely clean today,” confirms Trippacher. 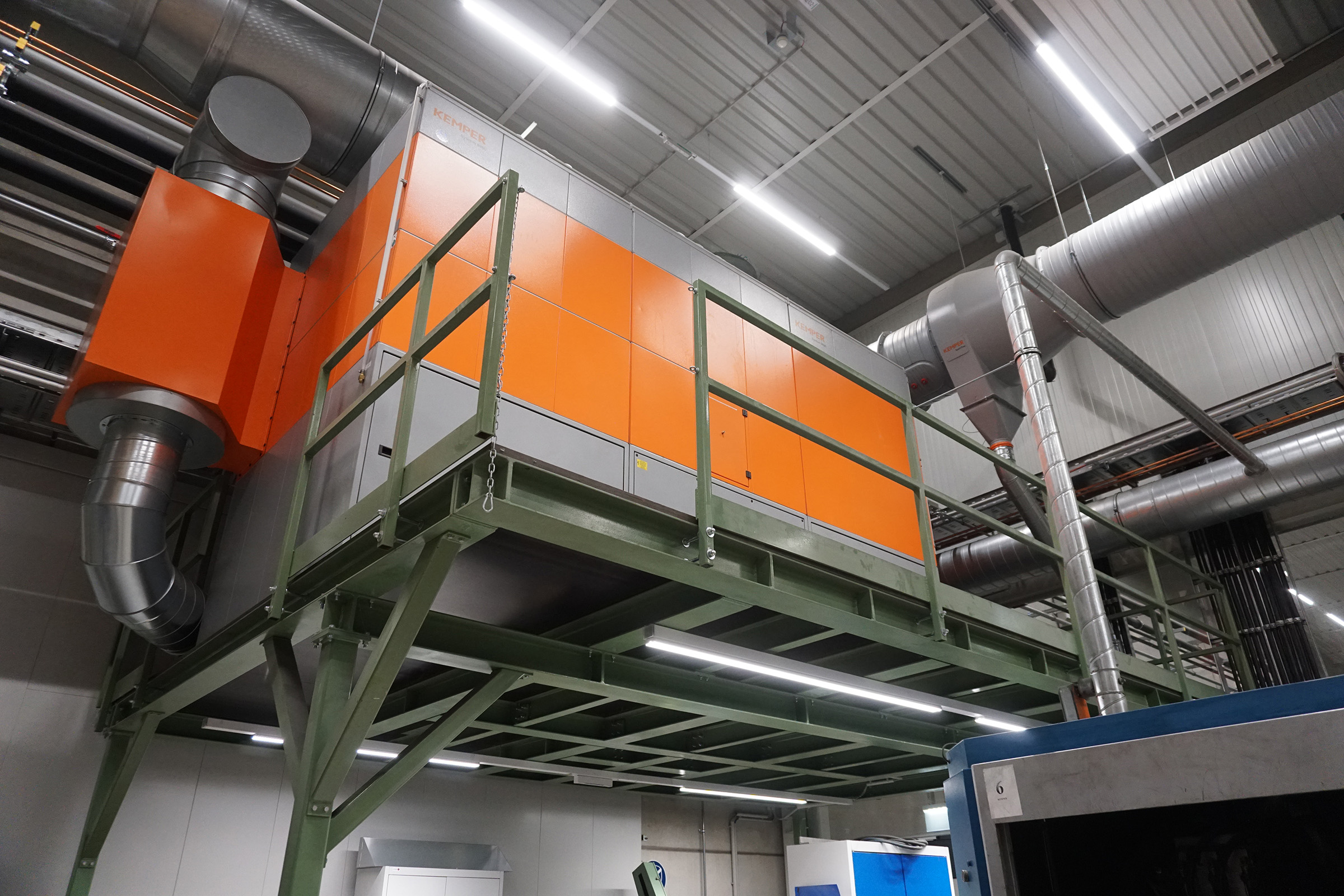 KEMPER adapted the extraction technology to the special health and safety requirements of individual work areas – even with a high degree of automation in the new RIKA production facility. The heart of the clean air concept is a central filter system. All collection elements from the individual work areas converge here centrally via a pipe system. The filter system is capable of separating more than 99.9% of the welding fumes from the contaminated air. In order to save space, it was positioned on a gallery specially set up for this purpose.

To prevent filter fires, KEMPER integrated the SparkTrap spark pre-separator. This keeps impurities out of the separation process. In order to connect the filter system with the collection elements, the company also laid more than 150 metres of piping in the new production hall. KEMPER installed the extraction technology for the detection of hazardous substances at three robot cells, nine manual welding stations plus reserve station, four spot welding systems, one stud welding system, two manual grinding stations and one robot grinding cell. The entire system is capable of extracting hazardous substances, even if most of the work is carried out in parallel.

Whether manual or automated: The detection elements are precisely matched to the respective processes. KEMPER installed two extraction tables for the grinding work as well as extraction systems for stud welding machines. In addition, more than ten extraction arms with integrated extraction bonnets at the manual workstations ensure that the welding fumes can be extracted directly at the point of origin and that the hazardous substances do not spread in the hall air in the first place. Due to the special design of the bonnets, they achieve a 40 percent higher collection efficiency compared to conventional solutions, so that less tracking by the welder is required. The extraction arms are particularly easy to handle thanks to 360-degree rotation and smooth running.

Despite the high degree of automation, occupational health and safety at RIKA sheet metal components does not end at the employees’ workplaces. In order to prevent surrounding people from being endangered by welding fumes and grinding dust, KEMPER also equipped the robot stations with effective extraction technology. 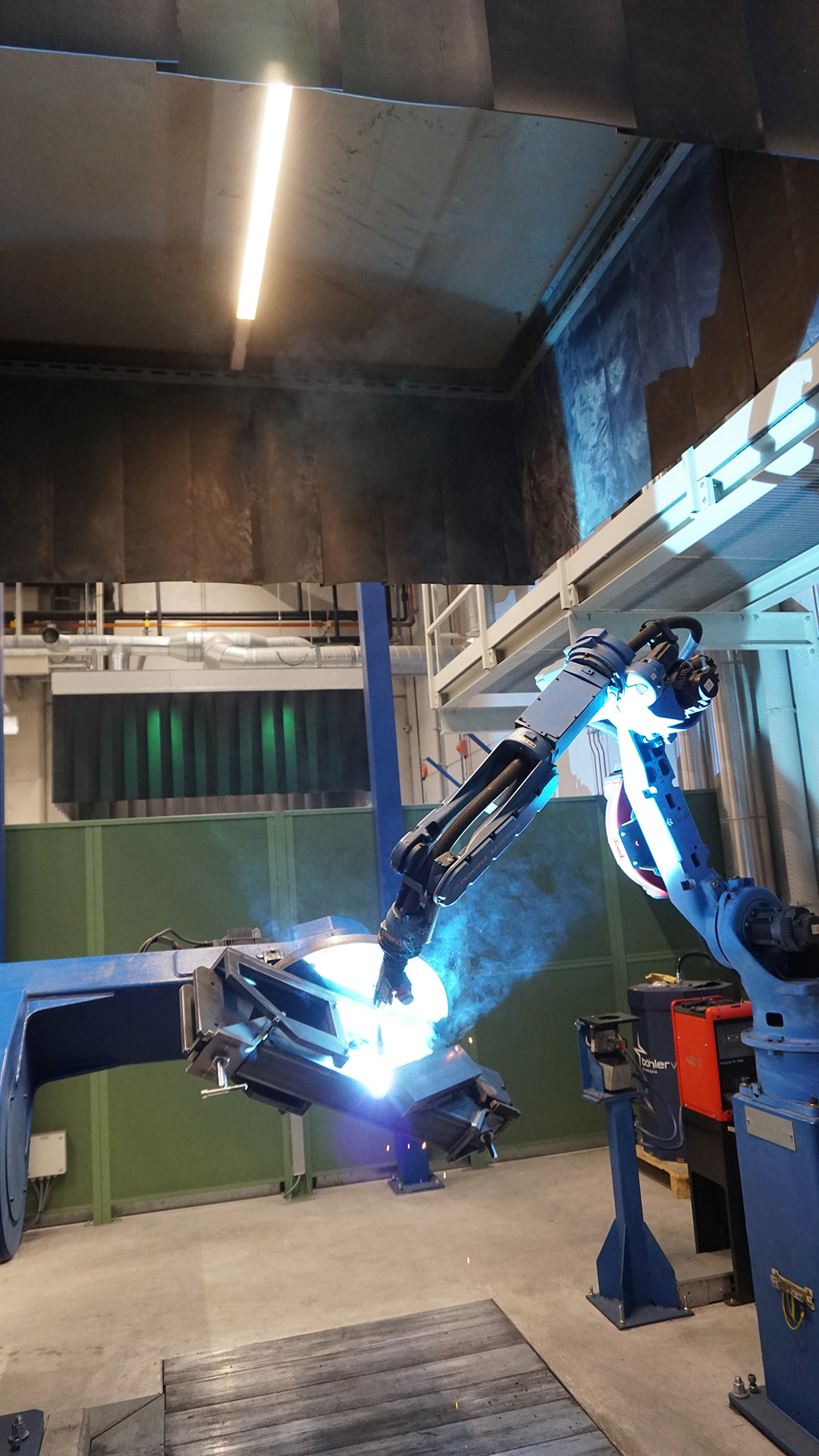 Two extraction bonnets of the appropriate size, adapted to the respective work areas, also ensure that the welding fumes do not spread into the ambient air thanks to the lamellas on the side edges. In the robot grinding cell, too, the extraction takes place directly above the point of origin.

A clear organisational separation of the individual work areas rounds off the comprehensive occupational safety concept. In addition to air pollution control, various separations create a clear structure in the hall. Noise protection systems complete the package of measures. This is because in metalworking, noise also represents a not inconsiderable health hazard. A positive side-effect for the employees is that they are not only protected against noise emissions from other workplaces, but they can also concentrate better on their work and are thus even more productive.

Positive employer signals in times of shortage of skilled labour

The fact that the clean air concept not only has a direct positive effect on the health of employees is demonstrated by its further benefits for RIKA Blechkomponenten GmbH. After all, consistently practising occupational health and safety is increasingly becoming a competitive advantage for metalworking companies. Against the background of the shortage of skilled workers in Austria, RIKA Blechkomponenten has already positioned itself for the future. “At RIKA, the future of metalworking is already a reality today,” says Michael Schütz, responsible for extraction technology at Arnezeder GmbH, which accompanied the entire project with its partner KEMPER. “The growing demand for effective solutions to air pollution control is a clear indication of its increasing importance in companies.” The current driver of this development is not legal regulations for compliance with occupational health and safety, but the lack of skilled workers.

Safe welding in times of corona: How protective welding equipment helps against the virus – and welding fumes