The work processes for thermal cutting are always developing.  In combination with the use of new work materials, it is thus essential that measures for employee protection in the workplace with regards to damage to health are continuously optimized and improved – this also applies for thermal cutting. For gas flame cutting, plasma cutting and laser cutting – all processes of thermal cutting – the composition of the basic material is important with regards to the chemical composition of the particulate matter, i.e. the dust. Despite the fact that the diameter of particles produced by gas and plasma cutting is larger than those produced by welding, particles are just as respirable (entering the lungs) and thus hazardous to the health and partially carcinogenic. Very fine particles can also be generated during processes with great energy density such as laser cutting. There is a health risk due to gaseous and particulate substances depending on the composition, concentration and time period for which an employee is exposed to a harmful substance.

Gas flame cutting is one of the most important production 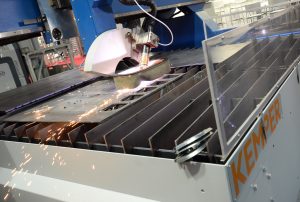 processes in the metal industry. It is used for unalloyed and low-alloyed steel for medium to large plate thicknesses and is also used in the processing of train tracks, among other things. This creates high smoke emissions – depending on various parameters:

Plasma cutting processes are used to cut sheet metal with a thickness of about 100 millimeters. In general, a high concentration of particulate matter is released when using this form of thermal cutting. Hazardous substances are mainly dependent on the composition of the workpiece as well as the chosen cutting parameters and on the type of plasma gas used.  More particles per time unit are generated during great cutting flows and high cutting speeds. These emissions occur during plasma cutting:

If the materials contain chromium or nickel, then carcinogenic chromium (VI) compounds and nickel oxide are generated. When using compressed air and/or nitrogen as plasma gas, then a large quantity of nitrogen oxide is generated.

Laser cutting can cut and separate nearly any material. The process is used for small and medium-sized material thicknesses in order to process complex two or three dimensional shapes quickly and accurately. Due to the complexity of the procedures and equipment, a range of different factors determine which hazardous substances are generated in which concentration and harmfulness. For laser cutting with a CO2 laser, the following parameters affect the quantities of the emitted harmful substances: 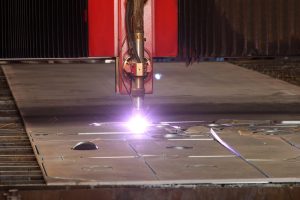 When using so-called solid-state lasers, so-called Nd:YAG lasers, then the emissions of harmful substances are less than for CO2 lasers. Once again, the increase of work material thickness also increases the cutting dust emission – and once again the cutting dust is considerably reduced if nitrogen is used as the processing gas. Furthermore, these parameters also influence the quantity of emitted harmful substances:

For all processes of thermal cutting, the use of effective extraction technology is thus necessary. In order to prevent the limit value for the A-fraction of dust (1.25 milligrams per cubic meter) being exceeded when thermal cutting at the machine (independent of the chemical composition of the materials), technical protective measures have to be introduced, such as under the table extraction. Otherwise, independent of the basic material, the relevant limit values (maximum workplace concentration and old technical concentration guideline) are exceeded quickly. The extraction table  with powerful filter systems are essential and ensure the safety of employees if there are large quantities of fine dust.

The serial “Welding process” highlights the dangers behind the most common types of welding – from the gas welding through inert gas welding to thermal spraying. Which hazardous substances are emitted when welding a particular material? What effect can this have on the health of welders according to the latest scientific findings? We will inform you on the following subjects in nine parts:

Welding fumes explained in brief: Why an extraction system is so important

Hazardous substances in welding fumes: How they affect the human body