VacuFil: The story behind the unique torch-integrated extraction system from KEMPER

KEMPER has developed a unique system for torch-integrated extraction with the digital product variants of the VacuFil series. After numerous enquiries from users and torch manufacturers, KEMPER built up a torch database with key parameters. Read the story behind the latest development from the extraction technology specialist.

New requirements for torch-integrated extraction and increasing demand from the industry led to a rethink among welding torch manufacturers. Extraction torches had long been regarded as unwieldy and only covered a marginal area of the company’s own product range, so the focus shifted to the further development of torch-integrated extraction. But, in many cases, there was a lack of expertise or capacity to initiate the necessary development work themselves. This is where the extraction specialist KEMPER came in.

Solution for a high coverage rate for torch-integrated extraction

Numerous welding technology users turned to KEMPER at the time when the requirements of the French health insurance companies became effective and their compliance has since been monitored. They wanted confirmation for the following: Can the desired unit meet the requirements of the INRS with the planned extraction torch? With its decades of know-how in welding fume extraction, the manufacturer set about ensuring effective torch-integrated extraction. The aim here: The extraction units from KEMPER should meet the French specifications. 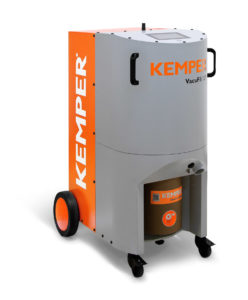 In order to make such promises, the exact adjustment of various parameters played a role:

This information was usually missing on the part of the welding technology manufacturers.

Against this background, KEMPER set up its own testing facilities similar to those of the French Institute for Occupational Health and Safety. The manufacturer measured the exact characteristics of various welding torches. The KEMPER experts discovered a difference between the target volume flow and the actual volume flow. This was because with many torches on the market to date, the necessary flow-optimised design was often disregarded and correspondingly high flow resistances were the result – or still are today.

However, the volume flows at the connection piece and at the intake opening near the burner tip differed in all models. This is due to a certain, but certainly notable leakage in the burners where air is sucked in at the connection points, thus reducing the extraction capacity available at the burner tip. KEMPER continued to calculate: If such an extraction capacity is required at the front of the burner for the highest possible degree of capture, how much must be extracted at the rear of the connection piece? Burner characteristics such as the shape and position of the air sampling openings were included in the calculation.

The result of the KEMPER measurements: There are extraction torches that can meet the current INRS requirements with a vacuum of less than 5,000 Pa at the connection piece, whereas even 20,000 Pa is not enough in others. During the development work, KEMPER established further rules for its own product development:

Against this background, KEMPER initiated further development steps for torch-integrated extraction. The end result was the VacuFil 125 mobile extraction unit that is now supplemented by further variants. The highlight of the digital extraction unit for single workstations: The volume flow is permanently measured by means of a built-in measuring opening, displayed to the operator and automatically readjusted.

On the display, welders select their respective torch – which KEMPER has previously measured – from a welding torch database. The unit adapts the extraction capacity to the selected torch. The continuous measurement of the volume flow not only allows adaptation to the welding parameters, but also to increasing filter resistance or changing hose lengths. The database of selectable torches and their data is continuously being expanded by new torches. VacuFil can be automatically updated using cloud networking. For torches not listed here, the required flow rate can be preselected manually and is then also readjusted automatically.

Our short series “Torch extraction” deals with the current developments in torch-integrated extraction. Why this trend right now? What is regulated? Which efficient solutions are available? In three episodes we report on the following topics: