Four CleanAirTowers, a new displacement ventilation system from KEMPER, have been in use since mid-2014 by the Heerema Fabrication Group near Rotterdam. Since then the smoke ceiling has disappeared.

A thick cloud of welding fumes used to hang over the heads of the welders. Today, thanks to an innovative room ventilation system, fresh air reigns in the Dutch workshop of Heerema Group. Since the middle of 2014, this manufacturer of offshore rigs for the oil and gas industry has been using CleanAirTower, the innovative displacement ventilation system. From one day to the next, the company increased occupational safety for the welders and provided clean air for its Zwijndrecht facility near Rotterdam. 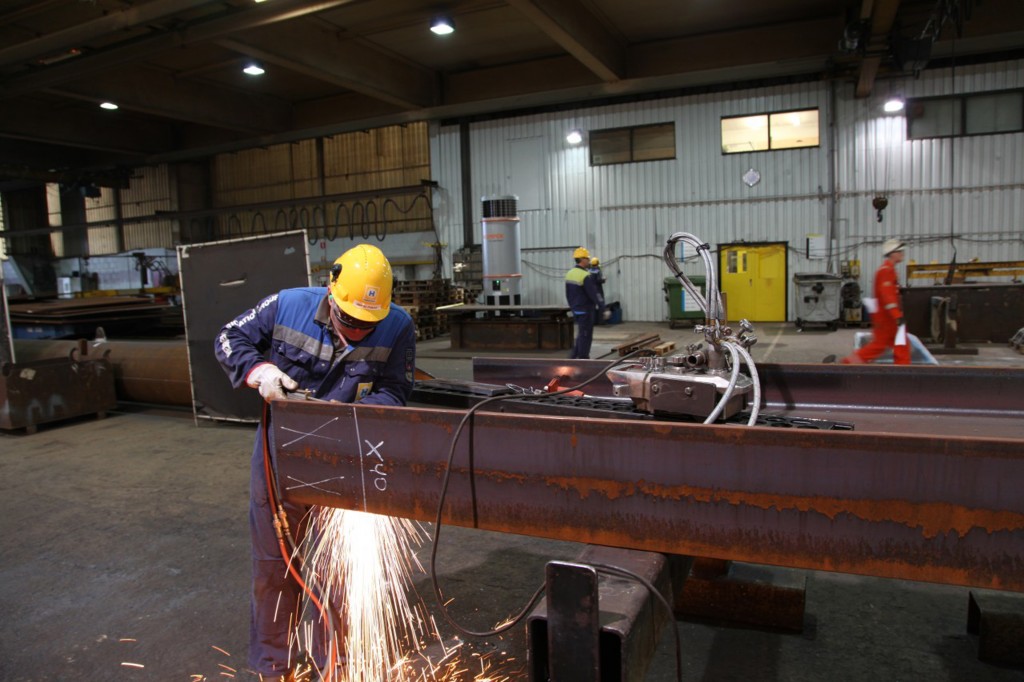 Welding fumes: danger over the heads of the Heerema welders
In view of the manufacture of large components such as pipelines or parts for platforms, occupational safety had for some time taken a back seat. Because spot extraction was impractical for their products, the employees welded using only their own personal protective equipment. An effective extraction system was missing. Welding fumes flowed into the building unimpeded. As a result, a constant ceiling of welding fumes about 4 meters high formed across the entire building.

Seeking an efficient solution, KEMPER GmbH, manufacturer of extraction and filter systems in Vreden/Wesfalia, Germany, designed several options for pollution control. Because work stations were constantly moving, a central ventilation system did not make sense for Heerema. In the end, the Dutch company decided to go with the new CleanAirTower system. Heerema placed four units in the 100 meter long, 25 meter wide building.

System with recommended ventilation principle in use
“Since we started using the four towers, the air quality has improved tremendously,” says Bart Pluijmers, asset and facility manager at Heerema Zwijndrecht. The new KEMPER system works on the recommended layer ventilation principle. Each tower extracts polluted air in a radius of twelve meters in a 360 degree circle, four meters high. Once inside the towers, the particles meet the so-called swirl vanes, which transfer air in rotation so that heavy particles and sparks land in the discharge channel without clogging the filter.

As the filter gets loaded with dust, the extraction performance remains constant by means of a regulator. 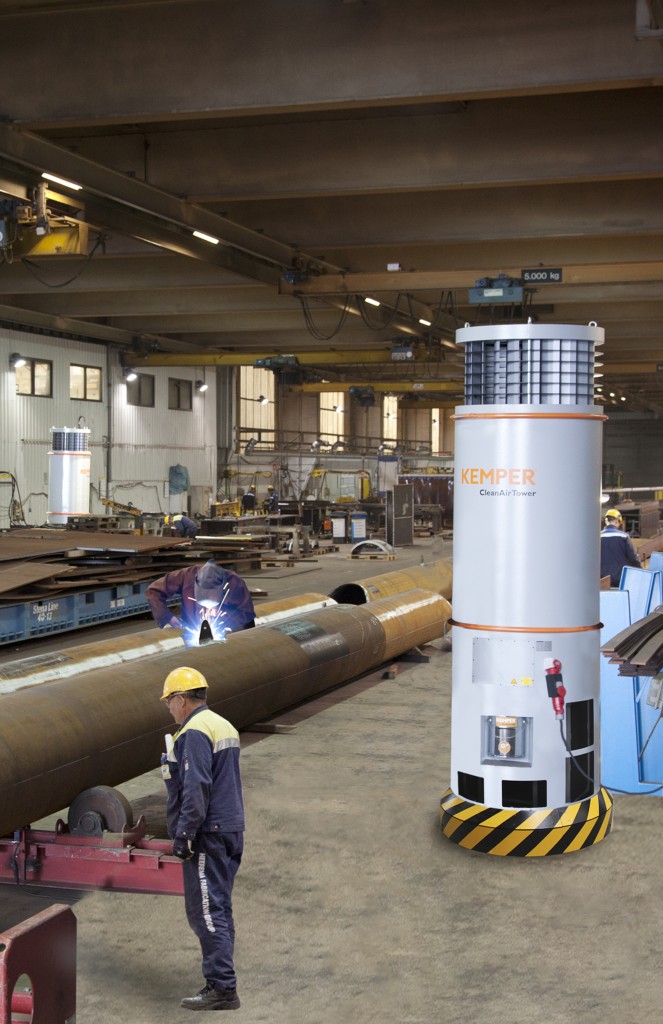 The filter element is cleaned with pressurized air as needed. Particles fall into a hermetically sealed area, from which they are pneumatically discharged and conveyed into a disposable cartridge. Thereby, a contamination-free disposal of harmful fine particles is possible. KEMPER has applied for a patent for this unique technology. The cleansed air is quietly discharged below in a 360-degree radius, thus lifting the welding smoke higher.

Penetration through flexible positioning of ventilation
The flexibility of the ventilation system also benefits Heerema. Conventional displacement ventilation is used selectively at certain points and is effective only in a specified range; penetration is not achieved. CleanAirTowers at Heerema, however, staggered throughout the building, cover a wide radius. Because the units are not connected to a pipe system, Heerema is able to flexibly place them in the facility near ever-changing welding work areas.

“These days we keep the doors shut, because we don’t have to ventilate manually,” says Pluijmers, “so air that is already warmed stays in the building.” The welding smoke cloud doesn’t appear anymore. But most important: “Using the new ventilation system creates greater work satisfaction for our employees,” Pluijmers notes.